It probably says a lot about my general reading habits that my first thought about seeing this was that it was like a fantasy world guide except that what it describes and shows detailed pencil sketches of is all real. It starts with pictures of different tools and then moves on to show different types of boards and logs and different ways of making a wall and the different layouts for the structures and the different purposes for the different structures. (And I have now learned that there are cellars vs ground cellars and dry cellars vs wet cellars; not to mention that those crescent moon cut-outs on out-houses mark those as being women’s privies – they’d be sun cut-outs for men’s privies.) 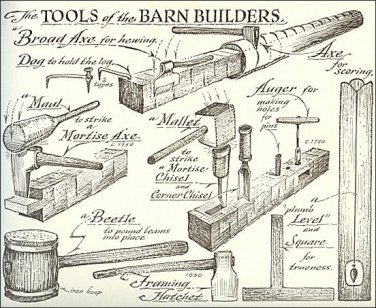 My second reaction, after I’d actually started to read it, was really thinking about how smart and skilled those early farmers were. They would cut down and then carve these trees into interlinking logs. They really are like Lincoln Logs(TM) except more detailed, more individualistic, and a gazillion times more heavy. They knew how they wanted these logs to connect and then they carved them to slot together just so, all while using a medium that can’t be manipulated by one man on his own. It has to be a massive group project.

My third reaction, after having gone to see a barn that I’d previously seen several times, was that once I started to have an understanding of how a barn was put together, I started to see things that I had completely overlooked before because it didn’t previously hold any meaning for me. Before I had thought, huh, that log has an odd wavy texture to it; now I look at it and go: that was hand hewn using a broad ax. Before I hadn’t even noticed some notches on a banister, and now I look at it and go: that is repurposed wood from a different section because the notches on it were intended for something different.

And a final thought: this was written well-before Wikipedia existed but it is still this deep-dive into an esoteric research rabbit hole and it’s amazing. I love getting to see someone else’s passion about something that wouldn’t have otherwise occurred to me as a thing to even really think about.

Anyway, the whole book is only about 90 pages, most of it images and diagrams, and it’s not really intended to be read through the way I did, but it’s still fascinating and I liked it.