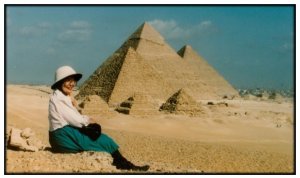 She was a prolific mystery writer, her characters are a delight, and her writing easily mixed suspense and humor. I particularly loved her sense of character though. Her heroines were all very real, with very definite personalities and perspectives. They were all people that I would have loved meeting, but also that I could have imagined meeting. They were real people and they continue to delight me. The love interests were also all strong personalities that could hold their own against the main characters, and the large casts of secondary characters were always zany and delightful.

I think growing up reading these books provided a wonderful salve to also growing up reading classic science fiction, which tended to skimp on the character side of things, especially when it came to females. Peters’ characters more than made up for the lack in any other books, though. Her were a delight and a wonder.

The first book of hers that I read was Crocodile on the Sandbank, which introduced me to Amelia Peabody, Peters’ most well-known character. Peabody is a British female Egyptologist in 1884. As you might guess from that, she is quite opinionated and strong-willed. Watching her butt heads with pretty much everyone is a delight. Amelia along with her eventual husband and eventual son are the focus of 19 books.

My favorite series of hers though is the one that follows Dr. Victoria Bliss, a medieval arts scholar who works at the National Museum in Munich. Vicky is Barbie-doll-esque enough in appearance that most people don’t take her seriously as a scholar. Her boss Herr Professor Anton Schmidt is Santa-Claus-esque enough in appearance that no one takes him seriously as an adventurer. John Tregarth is a master criminal who tries valiantly to not be taken too seriously. Together they find and/or get drawn into all sorts of historical and criminal adventures.

Some of my favorite books of Peters, though, are her stand alone novels, introducing whole new casts of characters and a single mystery to be resolved. Of her many such books, Summer of the Dragon is probably my favorite, closely followed by Devil-May-Care and The Love Talker.

This is an author well worth reading and who has had a major impact on my youth, reading, and writing. She set a high bar for others to follow.

Elizabeth Peters’ novels were some of my first adult novels, and I couldn’t have had a better author for transition. Her books are almost all mysteries, though when I think back on them, I can’t think of a single one that features a murder—they usually deal with theft of artifacts. They are all funny, with likable characters and light romance, which makes them perfect for a young teen graduating out of young adult books.

Devil-May-Care is my favorite of all of her books. It was published in 1977 and features a young woman caretaking her aunt’s mansion, which turns out to be haunted. Sound familiar?

Well, the heroine is smart, capable and mostly unafraid, and the other characters are all engaging and humorous. The plot moves along quickly and interestingly, and with great humor. One warning: each scene leads seamlessly into the next action, so it can be quite difficult to find a stopping point for breaks, leading to too many late nights this week.

A line toward the end of The Shining brought this book to mind for me and inspired me to pick it up again (very mild spoiler):