I have been eagerly awaiting this third book in the series for several months now, and I should have been using that time to reread the first two books. Whispers Under Ground does not stand alone very well, and unfortunately I’d forgotten a lot more of the previous books than I’d realized. No doubt due to my poor memory, the plot seemed a bit muddled, but the characters were just as charming as ever (seriously, PC Peter Grant is one of the most likable characters I’ve ever read).

Addressing the characters, however, leads me to a bit of a rant about the book publishing industry: why don’t the people writing the blurb on the back of the book actually read the book?! Here’s the last few sentences of the back cover description for Whispers Under Ground:

“…It’s up to Peter to plumb the haunted depths of the oldest, largest, and —as of now—deadliest subway system in the world. At least he won’t be alone. No, the FBI has sent over a crack agent to help. She’s young, ambitious, beautiful…and a born-again Christian apt to view any magic as the work of the devil. Oh yeah—that’s going to go well.”

I first read that and was actually kind of dreading this new character, which seemed like such a fantasy and mystery trope: the mismatched partners, with the protagonist having to scramble to cover all evidence of anything magical. I don’t think it is a spoiler to say that this character doesn’t exist in this book. There is an FBI agent; she is female, smart and ambitious; the book never mentions her religion or level of attractiveness. I liked her, and I was impressed by Aaronovitch writing her. I’m not impressed with the author of the back blurb trying to fit an unusually professional relationship into a trite drama.

Okay, rant over and back to normal programming: Aaronovitch, who previously wrote episodes for Dr. Who, is clearly, and endearingly, a huge fan of the entire fantasy genre. Affectionate references to the Lord of the Rings, Avatar: The Last Airbender (cartoon, not movie), Dungeons & Dragons, and The X-Files are sprinkled throughout the text. It became kind of a game for me to try to track down all allusions.

Midnight Riot and Moon Over Soho
by Ben Aaronovitch 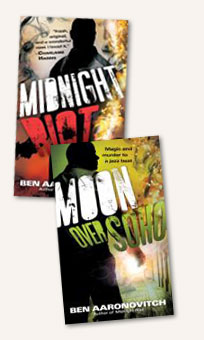 The cover of Midnight Riot, Ben Aaronovitch’s debut novel (he has previously written episodes of Doctor Who), has a praise blurb from Charlaine Harris. I get that Charlaine Harris is a popular bestseller, and I sincerely hope that her quote helped Aaronovitch sell more books, but it inspired in me similar outrage as Roger Ebert giving Nicholas Sparks my current favorite author burn:

“I resent the sacrilege Nicholas Sparks commits by even mentioning himself in the same sentence as Cormac McCarthy. I would not even allow him to say “Hello, bookstore? This is Nicholas Sparks. Could you send over the new Cormac McCarthy novel?” He should show respect by ordering anonymously.”

Now, I’m not daring to say that Ben Aaronovitch compares to Cormac McCarthy, but he is a significantly better author than Charlaine Harris.

The praise blurb on the back of the book says, “Midnight Riot is what would happen if Harry Potter grew up and joined the Fuzz.” (Diana Gabaldon) I would say rather it is like if The X Files was British and funny. I’m not entirely clear on what the difference between those two is, maybe that the magic elements are addressed in a practical, scientific manner.

Here’s the highest praise I can give a book: the protagonist, Peter Grant (“rookie cop and magical apprentice”) catches onto plot twists as quickly as I do as the reader. Pretty much as soon as I start to think, “hmm, that other character seems kind of suspicious,” Peter Grant thinks the same thing and acts on it. It is extremely satisfying as a reader.

The third book in the series, Whispers Under Ground, is due out in May 2012, and I can hardly wait!