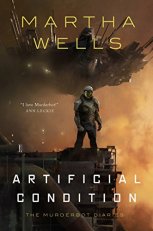 These are the first two stories in the Murderbot Diaries series, which I understand is intended to be a series of four stories, with the remaining two stories due out in August and October, respectively. I am so excited!

It was only in writing up this review for Artificial Condition that I realized I’d somehow failed to write up a review previously for All Systems Red. (“somehow”, ie, I’ve been incredibly lazy about writing reviews and need to hop to it.)

All Systems Red won the Nebula Award for best novella in 2017, which is particularly awesome to me since I had read it before then.

These are really fabulous stories, and one of the rare examples (in my ever so humble opinion) of successful use of first person narrative. And one of the real benefits of the first-person narration is that Murderbot is sexless and genderless, and while the writing addresses that specifically, the lack of a standard non-gendered third-person pronoun in English isn’t a problem because it obviously refers to itself as “I”.

Our protagonist also refers to itself as a Murderbot, although the official designation is “SecUnit”, standing for Security Unit. The more I think about it, the more complex and on point the message becomes in using the term “Murderbot” instead. We are told that SecUnits have governance modules to that keep them controlled and when those governance modules fail, the units will go on essentially murderous rampages seeing everything and everyone as a security risk to be addressed with maximum force. Our protagonist, however, has hacked its governance module and spends its free time downloading media and keeping itself entertained. It performs its assigned tasks, just now by choice (or lack of interest in dealing with alternatives) rather than through direct control, and watches a lot of space opera TV shows.

But then, of course, plot happens, and it turns out that having the freedom to make nuanced decisions rather than follow specified algorithms with pre-set decision trees is actually a real benefit in providing quality security to individuals under attack.

So far, each of the two books has its own plot with characters who need security, but the greater plot arc across the series seems to be figuring out Murderbot’s history and the possibly the nature of SecUnits. But all in all, it’s a delightful character study with some interesting plot. I highly recommend.