So, I’ve moved to Michigan! My life got increasingly frantic leading up to the move, and now I’m surrounded by boxes, but things are calmer. I’m currently reading Rewind, the fourth in the Pinx Video mystery series, which continues to be a delightful mix of noir-ish detachment and absurdist humor. It is a perfect counterbalance to the stress of packing all of one’s belongings up in boxes and then having to unpack them again. 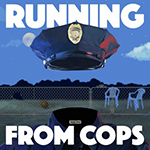 HOWEVER, have I got a podcast recommendation for you! It is fascinating, intense, and disturbing, and I have to take it a little at a time. “Running from COPS” is a widespread look at the show COPS, which I was shocked to realize has been on for 30 years and has aired more than a thousand episodes.

I was never a huge fan of the show, but also didn’t think very hard about it, assuming it was just a normal look at law enforcement, and how you viewed the show depended on how you viewed law enforcement in general. Which, according to the podcast, is an entirely intentional impression created by the show and has had truly insidious effects on the evolution of law enforcement.

The podcast interviews the creators of the show, network producers, retired police, lawyers, and most importantly the “criminals,” who are often found not-guilty after the cameras have turned away but will forever be “the person on COPS”. The creators ask a lot of very good questions and then follow up with the people that can answer them, which is the very best of critical-thinking media these days.

I think, like a lot of complacent, middle-class, white people, I had generally bought the argument that while flawed, law enforcement was generally trying its best, and the last decade or so has been a continual waking up to a very different reality. This podcast, for me, has been yet another wake-up call on how methodically the institution of law enforcement has been normalizing and even celebrating human rights abuses. It is not always an easy listen (honestly, in this day and age, just listening to the audio from episodes is upsetting), but I highly recommend it, not only because it is an important eye-opener but it is just great podcasting!