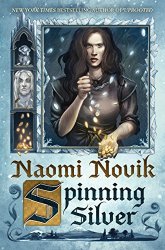 I spent an afternoon and two evenings gasping “oh no!” in between bouts of giggling, and stayed up way too late both nights and had a very difficult time putting it down for a night and a work-day in the middle. I love Novik’s writing and her characters are a delight, and she keeps her plotting fast and dense, and just so much happened and I loved it all!

The story is clearly inspired by Rumpelstiltskin, but makes a lot of changes, and really focuses around the theme of trading value for value, as it tells the interlinked stories of a young jewish money lender, a poor servant girl, the daughter of a duke, a tsar, and the king of the winter elves.

The world-building is also amazing as Novik introduces a whole magical realm in parallel to a more historical Russia, and then leaves both the reader and the main characters to piece together the rules of magic and society that permeate that alternate world.

It also made me realize that while, like any fairytale, it’s something of a morality tale, the morals quite difference from the standard. Many fairytales have the moral that if you remain kind even in abusive situations, then you’ll eventually get out and go on to have a good life. Which is an important lesson and is touched on, but isn’t the main one here. And this one is equally valuable: be ruthless in your demands for fair treatment and harden your heart against those who would emotionally manipulate you to avoid the consequences of their actions.

So, to sum up, this was amazing and I highly recommend it. It also kind of reminded me of not only Novik’s previous book Uprooted, but also Bujold’s Sharking Knife series, and Mckinley’s Sunshine, all of which I also really liked and recommend.