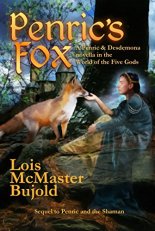 Penric’s Fox (story #5) is essentially a sequel to Penric and the Shaman (story #3). Although it’s set some years later, it’s the same cast of characters and is set decidedly before the events of story #4. One of the things I really enjoy about Bujold is that she plays around with her genres even in the same series and thus this is a detective story, with a discovered corpse and police investigation and all. It was also kind of heart-wrenching and made me tear up a bit but just so very good.

Prisoner of Limnos (story #6) is a direct sequel to Mira’s Last Dance (story #4) with barely a few weeks having passed for the characters between the two books and dealing directly with some of the uncertainty left at the end of #4. I was also all geared up for some raciness to it, too, but Anna can be reassured that events stay relatively chaste (even as my mind is in the gutter giving me occasional wink-wink nudge-nudges.) This is something of a heist storyline and also introduces a whole swathe of new secondary characters that seem very interesting and open up all sorts of possibilities for future story lines. While this one doesn’t end in quite the almost-cliff-hanger (emotionally at least) of #4, it does leave me just craving more. I just really need to know more about those new characters and their stories and what they do next. I’m keeping my fingers crossed that Bujold continues to write these stories at the amazing pace she’s had so far.