This was a very cool concept by the publisher and a great present from @bookdom. Thank you, Anna!

25 unlabeled short stories to be read as an advent calendar from December 1st through December 25th. They came in a boxed set with each story is bound and sealed with its own individual cover listing only a number. Sweet! 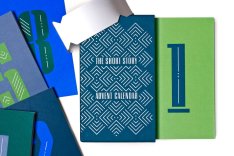 I love the concept! The implementation, alas, was a bit rough.

Only four of the stories were Christmas-themed, and I only actually enjoyed seven of them. The stories tended to be “literary”, which made me think about what “literary” really means to me. I had started out with the definition of “miserable people living miserable lives”, but then expanded it to, “miserable people living miserable lives written by an author who dislikes the world.” And then expanded that to, “… an author who dislikes the world but is proud of their dislike, because it’s ‘realistic’ rather than ‘niave’.”

One of the commonalities I kept on running across is that the main characters, dealing with a variety of their own issues, would look at someone else walking down the street or sitting on a bus or whatever and say in the narration: that person has dead eyes and no understanding of the world or philosophy or whatever, that person has no interior life.

But while I only enjoyed seven of the stories (and even those could be a grind near the end, to get over my own expectation of dislike and give each story a fair chance to be appreciated), it was still interesting to see the different ways in which the authors were experimenting with the genre. The ways the stories were similar to one another, was often terrible, but the ways in which they differed had the potential to be fascinating, even, or especially, if sometimes I could tell the author was trying to accomplish something but couldn’t quite figure out what.

Anyway, the stories varied between 7 and 30 pages long, and each day, the website got updated with a short discussion post about the story.

To sum up: I would recommend this as a whole compilation to anyone interested in the craft of writing because it’s a great opportunity to see a lot of short trial runs, and decide which you think work and which you don’t and maybe be inspired to do something similar (but better.) But overall I disliked the stories. In case you were wondering, the stories I thought were actually good were 3, 7, 9, 20, 22, 24, and 25.

Also, I loved the concept and I wonder how hard it would be to put together my own advent calendar of recommended short stories for next year. I might need to make the attempt.