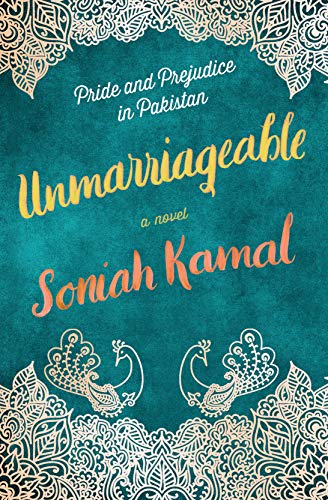 I think it’s safe to say that we here at Biblio-therapy are connoisseurs of all formats of Jane Austen tributes/adaptions/updates. In the past we’ve raved about the Lizzie Bennett Diaries and Longbourn, and I quite enjoyed Eligible, the most recent modern-day version of the story I’d read. The latest entry into the Pride and Prejudice but with X catalog is Unmarriagable,  which initially struck me as just a relocation of the classic but ultimately turned out to have a little more going on underneath.

This telling of the story takes place in Pakistan in 2000-2001, and positions the Bennetts as a family that slid from the upper-middle class after some business disasters. They’re now trying to maintain respectability in a small, backwater city. The two oldest girls teach at the English language high school in town, while their mother clings to her old status through the connections of family and friends. The author sticks very, very closely to the original–essentially every character and plot point has a direct translation to the new setting. This made the book feel a bit rote as I read through the very familiar beats: now we’re at the first ball, now it’s the first proposal, now Lizzie (Alys in this version) is traveling with her aunt, etc. But it was fun to see how names and clothes and celebrations were adapted to twentieth-century Pakistan, and I found myself doing a lot of Googling to make sure I could accurately picture the shawl a character was wearing, or the food they were eating.

So it was an enjoyable read, but I wasn’t sure if I initially felt it was adding anything new to the genre (at this point, I think retellings of Jane Austen is its own genre). However, as the book went along, it became clear that the author was using this story and setting as a vehicle to explore colonialism and culture. Alys teaches literature at the English school, which mostly consists of teaching her Pakistani students classics of English literature. But is this their culture? British colonization of India resulted in generations of Pakistanis who speak English and were raised on English classics, so these are their stories as much as anyone else’s. But how can Alys and her students also see themselves and their lives and cultures reflected in the cannon? Unmarriagable doesn’t necessarily have answers to these big questions, but watching Alys try to work them out for herself forces the reader to face them, as well.

You might also like: Other than the many other Pride and Prejudice-adjacent materials I’ve already mentioned, I’m going to recommend two widely different books. First, When Dimple Met Rishi by Sandhya Menon is a charming YA story about teenagers whose parents may have planned for them to marry and how they choose to deal with that in present-day San Francisco. Second, A Suitable Boy by Vikram Seth is literally 1,000 pages long and reading it felt like entering a long-term relationship, but it is a classic story of love and class and gender in 1950s India.