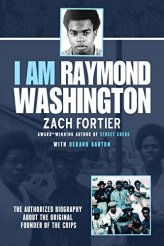 I am Raymond Washington
by Zach Fortier and Derard Barton
2014

The Crips were founded in Los Angeles, California, in 1969. This book mentions that there is some conflicting information regarding who takes credit for the gang, but that there shouldn’t be: it was Raymond Washington.

Raymond Washington was born on August 14, 1953 and died on August 9, 1979, just shy of his 26th birthday, and his story feels like something in between a classic rags-to-riches American myth and the story of Alexander the Great. He grew up in what was essentially an urban-American war zone and created order for his little section of it. He created something much larger than himself and died young. He was not the only kid creating a gang, but his particular gang grew and continues to grow well beyond the original intent some fifty years later.

Most of what I’ve read about gangs before (admittedly not a lot) has been from the external view: told from the perspective of police about these violent groups threatening the welfare of the established class. Despite Fortier’s history as a policeman, however, he clearly respects Washington and a significant amount of the book is recounting interviews with Washington’s friends and family. This gives the reader the interior perspective of the gang, where the violence is merely a necessary defense of what the gang really provided its members: a sense of structure in a chaotic community and a sense of protection from threats.

It really struck me that the way to fight gangs is not to be one more set of people fighting them, but rather to provide viable alternatives to the people who see the gang lifestyle as their only and best option. Because everyone, friends and family and Washington himself, knew that gang life was brutal and short and nothing you wanted for the people you loved. Raymond Washington was not a hero, but he also wasn’t a villain. Or maybe he was both. But he was certainly a complex individual.

Fortier is clearly impressed by Washington. It’s also clear that Fortier’s experience is as a cop rather than as an academic writer. The writing is very plain-spoken and direct, in some ways it feels more like an oral history than a written one. But he doesn’t buy into the mythos surrounding the conflict between cops and gangs; trying instead to get to the actual facts of the situation and the facts are fascinating. This is a really fascinating look at the impact of the racial tensions of LA in the 1950s-1960s on a child, and the impact in turn of the young man that child grew up to be on the world around him.