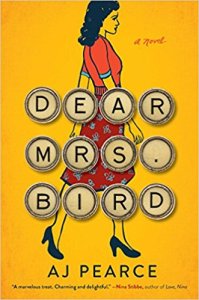 I am an absolute sucker for books about the Blitz. Something about the combination of London, historical fiction, the drama of WWII–I will read just about anything the features the word “Blitz” in the blurb. And I’m clearly not the only person who feels this way, since these books continue to get published. The new Dear Mrs. Bird by A.J. Pearce fits nicely into my favorite sub-category of this genre–women in the Blitz–while adding some layers I haven’t often seen.

Emmie is a young woman living in London in the early days of WWII. She works part-time as a fire dispatcher, but dreams of being a reporter and is thrilled to get a job at a magazine, sure she is on her way to be an intrepid war correspondent. However, it turns out that she is mostly doing typing at an old-fashioned ladies’ magazine whose editor won’t answer any sort of reader questions that deal with any “Unpleasantness.” Of course, there’s a war on and life is complicated, so Emmie ends up reading lots of letters from readers with serious problems, and can’t bear to think that they won’t get any response. She she starts responding and well, hijinks ensue.

Now, the basic plot here requires that Emmie spends a lot of time worried about being caught and worrying about what will happen when she does, and that is one of my least favorite things to read–I find that completely agonizing and by the end of the book was almost skimming scenes in her office for fear of what was going to happen. What saved the book for me were Emmie’s experiences outside work, where she and her best friend attempt to live their 20-something lives in the middle of a war. More than most Blitz books I’ve read, Dear Mrs. Bird gets across the feeling that yes, terrible things were happening, but that for those people living in the middle of the bombing, it became normalized. Emmie and her friends have to view the nightly bombings and tragedies as just another irritation to deal with, like bad traffic, in order to live their lives. And when you’re twenty-two, something like getting dumped is likely to feel like a much bigger deal than the war. And yet, at the same time, the book takes on the issue of how the internal and external pressure to keep the famous British “stiff upper lip” was hard on people, and how sometimes even the most patriotic Londoner needed to acknowledge the toll the constant bombing took on them.

There’s also just a bit of romance, although I couldn’t help but feel that Emmie might have landed in the wrong place there–I’m holding out hope that there might be a sequel featuring my favorite character, Emmie’s long-suffering boss at the magazine. He’s in his forties and spends most of the book rolling his eyes at Emmie’s adventures and the rest of the world, and I found him completely charming. And I’m sure that has nothing to do with the fact that this is the role I would most likely be playing in this story.

You might also like:  Well, obviously, The Guernsey Literary and Potato Peel Pie Society and the Bridget Jones books. But also a book I rave about a lot called The Lost Art of Keeping Secrets or another adorable one called Miss Buncle’s Book. And if you’re looking for a little period escapism with a lot of charming young British ladies falling in love, Mary Stewart basically perfected post-war romantic suspense and I read through all her work as a teenager–my favorites of hers were always Touch Not the Cat and Nine Coaches Waiting.

And if, like me, you’d just like to read some more books about the Blitz, Connie Willis’s Blackout and All Clear are epics that also involve time travel. I also love Life After Life by Kate Atkinson, The Night Watch by Sarah Waters, and The Distant Hours by Kate Morton. And in other media, check out “The Stolen Child” and “The Doctor Dances” episodes of Doctor Who and the movie Hope and Glory.