Writing a review of anthologies is sometimes tricky, because the contents can be so diverse and these three anthologies are even more so. But theme of them all is that they are stories about Native people and cultures, written and illustrated by Native people of North America. 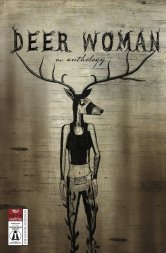 Looking up Rebecca Roanhorse made me realize that I actually already owned an anthology that she had contributed to. I had kickstarted it some time back and received the book but not gotten around to actually reading it. This was a good reminder to do so.

It contains thirteen entries and while some felt like the work of practiced professionals many felt like the work of people still developing their crafts. A couple of the stories I didn’t find particularly interesting, but some of the other stories left me struggling not to cry as I read them. I’m not going to call out any particular entries though, because I expect which ones you connect with will vary depending on the reader.

The theme of this collection felt like a precursor or ancestor or possibly both, to the #MeToo movement. Deer Woman is apparently a traditional character who seduces and then kills men, and in this particular anthology is celebrated as a protector and source of consolation to women who have been attacked by men.

Native American women are particularly vulnerable to sexual violence and the anthology both raises awareness of the issue and fund raises for a variety of resources: 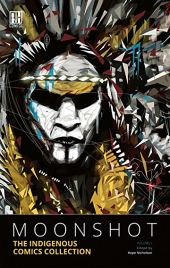 Moonshot was another anthology I got via Kickstarter and hadn’t gotten around to reading until recently. Unlike Deer Woman, however, this is clearly the work of experienced writers and illustrators, including names that I recognized from other graphic novels.

There are thirteen stories in Volume 1 and they are all beautiful. Some of them I was clearly within the intended or at least expected audience. A few of them felt like they were written for a native audience: there were expectations of shared background knowledge with the author that I didn’t have, but that’s not a bad thing. Picking up information from context is how most learning takes place. I was surprised that there weren’t more that felt like that. And sadly, one felt a bit like a standard comic book plot that I’ve seen many times, but with native American names attached to the protagonists and villains. 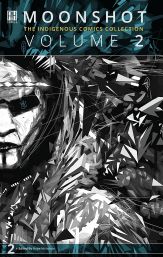 I was really impressed by volume 1, but I like volume 2 even more. It’s still the same high quality of art and stories, but this time it’s focused its theme to presenting the native cultures as modern living people and communities.

I’m reminded of how some people think that as a Quaker, I should be wearing long dresses and bonnets like the Amish do. But the Quaker tenet is for simplicity. So in an era where all women wore dresses, mostly adorned with ruffles and ribbons, Quaker women wore simple dresses. In the modern era, the tenet of simplicity is achieved by wearing jeans and t-shirts. The appearance is very different but the intent remains the same.

This volume tells historic stories of Native tribes, but shows how they live on in the Native people today. They don’t necessarily have the same appearance as they did three hundred years ago, but they have the same meaning.

Showing the traditional stories into the modern era gives them a strong impact. They don’t have the separation that comes from looking at events and interactions in the past. These are all stories happening now, trying to find light in darkness, bravery in fear, and struggling to protect Mother Earth and sacred waters from uncaring corporations. Also, this book made me cry.

All three of these anthologies are well worth reading. And you can be certain that I’ll be hoping for and keeping an eye out for a future Moonshot Volume 3.