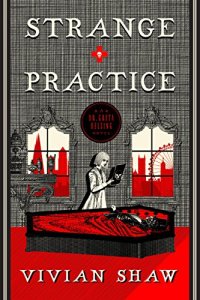 Anyone who spends ten minutes reading this blog would be able to tell pretty quickly that Strange Practice was going to be right up my alley. This initial entry in a series of magical mystery stories by Vivian Shaw follows Greta Helsing (yes, yes, her family dropped the van some time ago), a London physician dedicated to treating the city’s magical inhabitants. Mummies with feet problems? Vampire anemia? Ghouls who need psychiatric assistance? She herself may be human, but she has a calling to provide health care for mystical creatures likely to have issues accessing the NHS. There is an actual mystery here (crazy monks are murdering people, there’s a sort of nameless power from the dawn of time, etc.) but the real draw of this book is the assortment of characters that end up surrounding Greta. Some of the magical creatures she knows fit better into the modern world than others, but they all have to work together to save London and protect the secrets of its less-well known inhabitants.
This is Shaw’s first novel and the writing isn’t always effortless–there were definitely times when it felt like she was trying too hard to be clever and was getting in her own way. And I found that the point of view switched around too much for me to ever really feel settled into the story. Greta is nominally the main character and she is definitely the reader’s entry point into this world, but other characters (vampires, humans, demons, the villains of the story) also get so many chapters told from their perspectives that the ratio felt off to me. I’m hopeful that Shaw was trying to cram as many cool ideas and cool characters as she could into this first book, but that as she goes along she’ll start letting things breathe a little more.
But despite those quibbles about some elements of execution, I really enjoyed the book. The overall world created here was fascinating and very specific. I was left with the impression that this version of London has many more creatures with complex lives ad backstories that need Greta’s help, and that the group of vampires, demons, and humans that circles around her is well on the way to be becoming an odd little family. My Kindle version of this book included a teaser for the next one in the series, so it looks like I’ll have the chance to see what Greta and her team are up to next.

You might also like: Anything by Patricia Briggs or Ilona Andrews–I think the official Biblio-therapy position is that we are strongly in favor of those series. But Ben Aaronovitch’s supernatural mysteries, also set in London, would be good companions to this.