So, after reading Frank Miller’s A Dame To Kill For, I rewatched the movie “Sin City” and then decided to read ALL the Frank Miller Sin City graphic novels. I went on a wild reserving spree at the library; the library rental system just sort of lists “Sin City Frank Miller” for each of the volumes, so I had to do scattershot holds on all the books. I ended up reserving multiple copies of some volumes and no copies of the first volume until about a month after all the rest. So, I’ve been reading them as they come, completely out of order, but I’m going to quickly review them all in order here.

Quick caveat upfront: Frank Miller is not to everyone’s taste, so while I love the comics, I can’t indiscriminately recommend them to everyone. If you don’t like broad noir stereotypes and ultra violence, it doesn’t matter how well it is done, this is not going to be for you. For the rest of us, here’s my rundown, with semi-spoilers (revealing a character is in volume 5 sort of spoils that he doesn’t die in volume 4, I guess? Although, actually, only sort of. I was reading them out of their published order, but the volumes weren’t written in strictly chronological order, either):

The first panel of the book and the series: 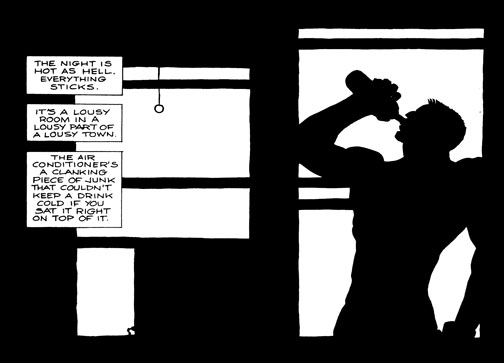 It doesn’t get more classically noir than that. Most noir mysteries are sweltering hot; sometimes they are bitter cold, but mostly roasting. Reading this issue last, I can tell that it was Frank Miller’s first (he is still finding his style for this series) and I can understand why it made such a splash in the comic book world. Everything is just so in-your-face: the violence, the machismo, the sex – I think it was probably unlike anything else people were reading at the time.

The Hard Goodbye is Marv’s (Mickey Rourke) story from the “Sin City” movie, the plot line with the most action but the least explanation, so I was happy to get more of the backstory this time around. With a couple of well-placed lines, The Hard Goodbye also gives a very quick overview of the origins of Sin City itself, which was most welcome after reading the other six volumes. At the end of this volume, too, I realized that The Hard Goodbye bookends at least several other volumes, with several of the subsequent volumes occurring to other characters within the span of time of this volume.

Volume 2: A Dame to Kill For

The Big Fat Kill is Dwight’s (Clive Owen) story, starting with him in Shelly’s (Brittany Murphy) apartment while she argues with her ex-boyfriend (Benicio Del Toro). I kept thinking that I had already read this one, but then realized that it is literally the same as the movie, frame by frame, line by line. It’s really quite impressive.

It also made me appreciate the movie even more. By entwining volumes 1, 3 and 4, they made for a diverse group of characters and quick pace that the original comics seem to lack a bit in comparison.

That Yellow Bastard is the Bruce Willis/Jennifer Alba story line from the movie. This is probably the most…problematic of the Frank Miller stories (and that is saying something). Spoilers for both the book and the movie, of course:

Retiring cop John Hartigan puts his life and career on the line in order to rescue 11-year-old Nancy Callahan from the pedophile son of a senator. He lives but is framed for the abduction and threatened into taking the fall. Nancy writes to him all the eight years he is in prison and he learns to love her like a daughter.

When he is finally released, he tracks down Nancy, and finds out that she is the most admired stripper in all of Sin City (stripper being about the highest level of achievement a woman can attain in Sin City). He also finds that she loves him, too, but in a much different way, throwing herself all over him. He’s appalled and honorably resists, but it still comes across uncomfortably like perhaps Miller is working through a personal fantasy, and a fairly gross one at that. (Also, the titular yellow bastard stuff is just frankly weird.)

The best part of the book is some of the peripheral characters. John’s legal counselor is also Marv’s probation officer from volume 1. When John goes to Kady’s bar to find Nancy after his release, Dwight is in the background crying over Ava, his ex-girlfriend from A Dame to Kill For.

We return to Dwight, who I much prefer over Hartigan, in Family Values. Dwight pursues an initially unexplained vengeance mission with the help of Mihu, the ninja girl assassin from the prostitute gang that runs Old Town. That sentence right there is exactly why I love Frank Miller. That’s right: the prostitute gang that runs Old Town has their own ninja girl assassin. She’s a bit of a gimmick, but a charming one, nonetheless. Dwight spends a bit too much time ordering her around, given how lethal and mentally unbalanced she is; you’d think he’d show a bit more respect, even if just for caution’s sake.

Anyway, the comic follows Dwight and Mihu as the purpose of their mission slowly unfolds. The drunken barfly that gives Dwight his first lead steals all her scenes and sold me on this volume right from the beginning.

Booze, Broads, and Bullets serves as sort of a summary of the previous five volumes in a collection of short stories, featuring various peripheral characters and quick character studies of new characters. Aha—this is also where Josh Hartnett’s bit in the movie came from! The stories were sort of a mixed bag, quality-wise, but worth the read just for Miller’s take on a Christmas story.

Volume 7: Hell and Back

This is the final volume on the Sin City series, and is a perfect finale! It introduces a new protagonist and love interest, which is a bit of a departure for Miller, who has been revisiting his usual stock of characters for the previous six volumes. The male protagonist is an army veteran, current starving artist, and pretty decent guy; the love interest is victimized per usual but is also relatively upbeat and resilient which isn’t as common in this world. In his final Sin City, Miller adds a full-color section that brilliantly and hilariously highlights an extended drug trip that the protagonist suffers through. This same hallucination includes cameos from a variety a pop culture characters that must have influenced Miller and some that he possibly either worked on or wanted to work on.

Here’s the kicker, too: it has a happy ending! I wouldn’t have even thought that was possible for Miller. I mean, the bad guys usually die horribly and the good guys go back to their regular miserable lives, but in this case, the guy gets the girl and the two drive off into the sunset to get the hell out of Sin City. A perfect ending!

(This was also the first volume in which I first noticed the desert iguana which witnesses, and occasionally barely avoids, the action. I saw it again in several other volumes, too, which makes me think it is probably in them all, and I just missed it in the others, so if you are reading through them, keep an eye out!)