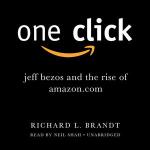 One Click: Jeff Bezos and the Rise of Amazon.com
By Richard L. Brandt
2012
read by Neil Shah

Curiously, this kind of reminded me of Mr. Penumbra’s 24-Hour Bookstore. It’s about a rather eccentric bookseller who isn’t actually interested in selling books so much as making a major impact on society. The fact that Amazon.com started by selling books is mostly a side effect of the fact that Bezos wanted to start a transformative online retail business.

Bezos seems like an interesting character. He’s presented as very analytical in his thoughts and emotions, as well as a visionary. I can’t help but compare him to Mark Zuckerberg of Facebook as presented in The Social Network (i.e., I haven’t actually read any nonfiction about Zuckerberg, but I’m still going to make this comparison.) They’re both very smart with a vision of using the Internet to revolutionize the world and somewhat out of step with other people socially. But where Zuckerberg comes across as trying a bit too hard to both fit in and to make other people fit to him and generally being an ass, Bezos comes across as being very comfortable with himself and honest about who he is and what he wants. He seems like a decent guy. Oddly, the author of the book strikes me as falling in between the two, trying rather desperately to model himself after Bezos (good for him) but still uncomfortable and nervous and trying too hard to casually use “nerd” as a descriptor rather than an insult.

In fact, Brandt come across in awkward in several says. First, he slants all the descriptions to show Bezos as being ultimately in the right, and all of Bezos’ questionable activities (standard CEO stuff: too demanding, too micro-micromanaging, too distant, too whatever) are presented in a lump in one of the later chapters rather than interspersed through the story.

Another oddity in Brandt’s writing is some of the rather lurid prose that occasionally pop up in a rather jarring fashion. I enjoy a certain level of purple prose: the grammar alone can add a pleasing complexity and richness to a description even beyond the subject itself. That said, “the stock prices fell like spit off a bridge,” “the stock was as sickly as a CEO with swine flu” and similar phrases gave me pause. The writing is generally fairly straightforward and even a bit pedantic, but it’d dotted with these WTF metaphors and similes that make me blink and go “huh.”

I’m really glad that I was listening to the audiobook version of this rather than trying to read it. There are long sections that strike me more like elaborated lists than any real narrative, and I’m fairly sure I would have bogged down in them if I’d been trying to read them. But with it read and simply playing out during my commute, I go at a steady pace and the information is fairly interesting.

Despite the rather lukewarm review, I enjoyed the book. I also found it a particularly timely read.

On Monday, I learned that Bezos is buying The Washington Post. He’s not even buying it as an Amazon.com acquisition, but rather through his personal wealth.

A while back, I watched Page One: Inside the New York Times, and despite it’s apparent intent to convince me that newspapers were still important, it mostly succeeded in convincing me of the opposite. Bezos has demonstrated a deep understanding of how online capabilities change retail. I very much look forward to seeing if he will demonstrate a similar understanding and sense of innovation regarding online capabilities in the information business.